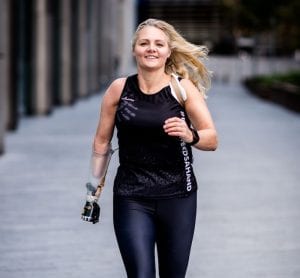 Paratriathlete Nicola Wilding has fought chronic pain for the last two decades, after a life-changing car crash at the age of 22, where her quick thinking meant she was the only casualty. Supported by Superhero Foundation, a charity founded by Pride of Britain award winning fundraiser Jamie McDonald, amputee Nicola hopes to raise £80,000 for surgery and prosthetics to improve her quality of life. Nicola will be taking part in three gruelling challenges over the next two years and is hoping that the public can come together to support her with her mission.

Nicola Wilding, from South Croydon, has been living in constant pain for the last two decades, after a devastating car crash at the age of 22 left her without the use of her right arm.

Now in 2020, Nicola’s goal is to once again have two working hands.

While driving along the A23 from Brighton, Nicola experienced a tyre blowout at 70 mph. Thinking quickly in the heat of the moment, she managed to avoid all other road users and steer the car onto the hard shoulder, however, without any crash barriers present on the road, Nicola’s car clipped the curb and rolled.

Nicola, a 42 year old mum-of-one, suffered a severe brachial plexus injury, damaging the nerves in her right hand and forearm.

Since 1999, Nicola has undergone numerous muscle and nerve transplants in an attempt to restore function, all while raising her now-24 year old son alone.

Nicola kept herself fit through cycling, running and swimming, but after years of frustration and sick of nerve and phantom limb pain, she begged doctors to remove the redundant hand and partial limb.

After being refused the removal of her hand in her twenties, Nicola waited until 2017 for elective amputation and reconstructive surgery to help restore the nerve pathways in her arm.

Through general fundraising and with the help of friends and family, Nicola has managed to raise an amazing £20,000. However, to continue with her treatment, Nicola needs to raise a further £60,000.

The money will be used to provide Nicola with a Bebionic hand, one of the world’s most lifelike prosthetics, as well as further operations to reconstruct and restore nerve pathways. With the specialised prosthetic costing upwards of £30,000, Nicola’s choices are to raise enough money for the operation or opt for further amputation to reduce her pain.

The particular prosthesis sought after is a ground-breaking myoelectric model designed to be connected to motor nerve sites and connected via electrodes where a strong signal is found. To move the prosthetic hand, Nicola will need to think about and practice an action so the signals can be read and the action completed.

Despite her ordeal, Nicola has continued to prove herself as an amazing paratriathlete, and will be taking on three gruelling challenges over the next two years in order to draw attention to her fundraising efforts, putting herself through a half Ironman in June 2020, as well as the national Three Peaks Challenge in 2021. Her amazing teammates will also be joining her, limited to the use of one arm only in solidarity.

Supporting the challenges is real-life superhero Jamie McDonald from Gloucester, who last year, dressed as alter-ego Adventureman, broke the Guinness World Record for the greatest distance covered on a treadmill in 7 days, just weeks after finishing his 210 marathon, 5,500 mile run across the US.

McDonald, 32, is supporting through his charity Superhero Foundation, by both providing advice and enabling Nicola to claim Gift Aid on all donations.

“I’m so proud that the Superhero Foundation have the opportunity to support Nicola on her journey. Not only did her quick thinking undoubtedly save further casualties and maybe even lives in the original accident, but what she’s been through is almost hard to wrap your head around. I’m sure with our support we can get Nicola the treatment she desperately needs.”

“There’s only so much money you can ask from your friends and family. My son has been absolutely fantastic. Not only has he donated as much as he can, he’s also taken so much time out of his busy schedule as a self-employed scaffolder to run me around and has helped me with all my kit. My mum has also been my rock throughout my journey, enduring all the early starts for my triathlons, she’s never far from my side!

“I hope that this can not only be an opportunity for me to be pain-free but also to help other amputees to realise that quality of life can be improved with the right support and technology.”

So please donate as little, or as much as you can – or even – set up your own fundraising page, take on a challenge, and ask your family and friends to donate.