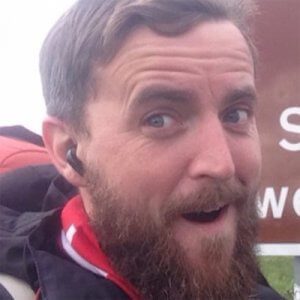 Wayne Russell, 34, was born and raised in Gloucester. He moved to London in his late teens, and has lived and worked there since.

His sister, Podsmead community hero Carmel Webb, died at the age of 35 on New Year’s Eve 2013, after a 10 year long battle with a rare heart condition. Regardless of her terminal illness, Carmel dedicated her life to charity, leaving behind her a legacy that won’t soon be forgotten.

Inspired and motivated by his sister’s commitment to doing good for the people around her, Wayne decided to run the entire coastline of Britain, all to raise money for Superhero Foundation, so we can help more families.

Wayne started in Greenwich, London on the 6th September 2015 and ran the 5000 miles. Equivalent to 200 marathons, in a very impressive 11 months.

Oh – and he did this all alone whilst recovering from a broken ankle held together by more screws than you’ll find in your local B&Q!

Armed with only a tent, £1000 of his own money to last him and a few bits of equipment like a tracker, Wayne camped in the open, used public restrooms and experienced the kindness of others including a number of fire station squads on his journey.

Wayne’s journey reached more than a million people through social media and media, if you’d like to read more, visit the BBC news, or ITV news websites.